It used to be that hoverboards were a thing of science-fiction fantasies and retrofuture dreams. The most well known hoverboard was the Mattel hoverboard from Back to the Future II. While a flying skateboard is still beyond our reality, hoverboards became one of the hottest gadgets in 2015 and since then is a beloved personal transporter of kids, teens, and adults. Find out all about hoverboards and how they work in this article.

What is the name of a two-wheeled scooter?

Some people not familiar with them may call them “two wheeled self balancing electric vehicles,” “two wheel stand up electric scooter,” or “two wheel scooter.”

What is a Hoverboard?

Hoverboards are no longer just a thing of the movies. In a nutshell, these personal mobility devices are essentially Segways without the steering handle. Invented in 2013, the transporter is made of two motorized wheels connected in the middle by two footpads which are used to control and steer the hoverboard. (Learn how to ride a hoverboard.)

Hoverboards are compact, often fit in a backpack or under your arm and can be carried and used anywhere where there is a flat surface (as long as they’re legal– which they aren’t in New York City or London because of traffic congestion). Some people have even been using hoverboards off-road but we wouldn’t recommend that unless you buy a rugged model. The hoverboards come in a variety of sizes, often based on the size of the wheels.

How do Hoverboards Work? 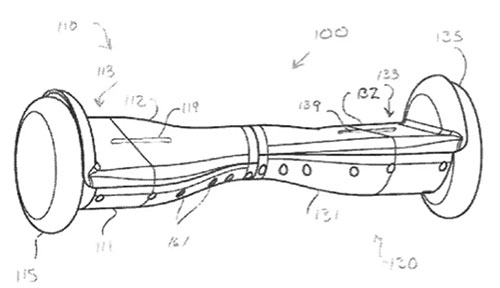 Hoverboards have two self-balancing gyroscopes that connect to separate motors for each wheel, which allows the unit to balance and move in the direction that the person riding the hoverboard wants. Hoverboards are split down the middle and connected by an axle so that the left wheel can turn out of sync with the right wheel (which allows the person on the hoverboard to spin around in a circle). 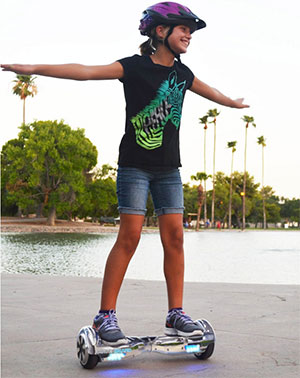 In late 2015, there were many instances of hoverboards catching on fire due to their batteries overheating and exploding. This resulted in a variety of hoverboard models being recalled and banned from sale in the United States because of those safety concerns. As a result, new UL certification standards were put in place to end these battery issues. Any hoverboard sold in the US or Canada today must have UL 2272 certification. (Learn more about the certification.)

With the new safety standards, hoverboards are as safe as electric skateboards and other personal transporters. We recommend wearing the same safety gear you would wear on a skateboard, if you’re new to it or planning on doing extreme hoverboard tricks, wearing knee pads, elbow pads, and a helmet may be advisable. When you’re first learning how to ride a hoverboard you are much more likely to fall.

How Much do Hoverboards Cost?

Even though hoverboards are a newer gadget, there is already a wide range of hoverboards from various manufacturers available, with prices ranging from over $1,000 down to only a few hundred dollars (Related: Top 5 Cheap hoverboards). As with anything, you get what you pay for though so choose your hoverboard carefully. We recommend these hoverboard brands if you’re looking for a reliable two wheel self balancing transport.

Where can you purchase a Hoverboard?

We provide several resources to choose the best hoverboard for you:

The Coolest & Most Unique Hoverboards

The Best Hoverboards for Adults